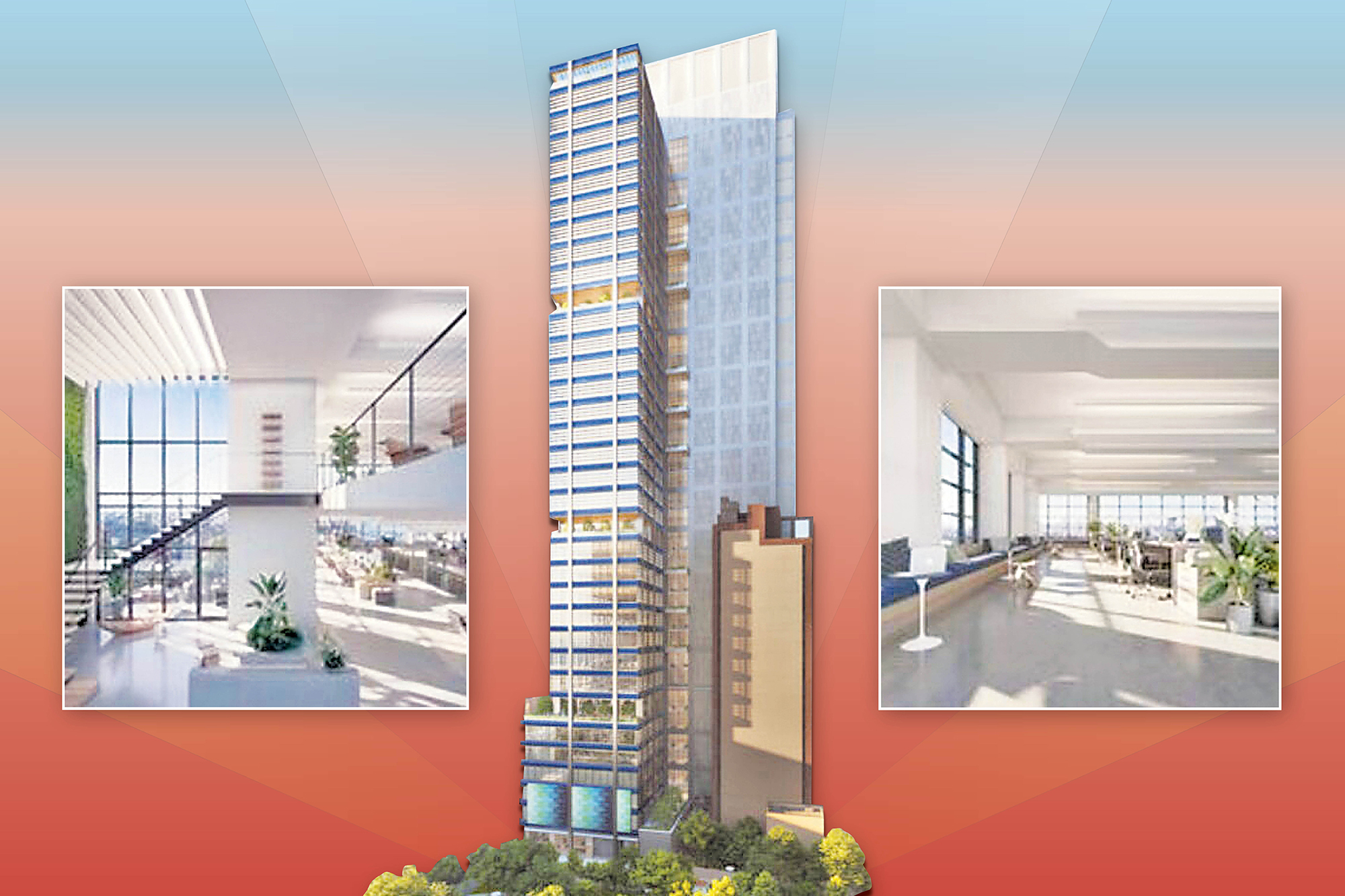 Architects routinely help developers promote new buildings they designed. But in one notable case, the architects loved their work so much that they decided to move into the striking new tower themselves.

FXCollaborative, previously known as FXFowle, is the anchor tenant at JEMB Realty’s nearly-finished One Willoughby Square in Downtown Brooklyn. The 34-story, 500,000 square-foot structure next to the DeKalb Avenue subway hub is the borough’s tallest new office building and scheduled to open later this year.

“We’re not just the tallest in the borough but the best,” JEMB principal Jacob Jerome cheerfully boasted.

“We looked around the area and we saw we were surrounded by luxury residential units. We decided we’d go full-office catering to the same people, this large-scale talent pool, living nearby,” he said.”

FXCollaborative will have three full floors totaling 40,000 square feet. The firm’s senior partner Dan Kaplan said his team was “increasingly frustrated” with the loft space they’d occupied in Chelsea for almost 25 years. “It was a good space but we felt hemmed in,” Kaplan said.

His firm was working on the Willoughby project for JEMB when he had a brainstorm. “I told my team, the whole point [of their search for a new home] is to have a platform for creative work. So let’s put us in the mind of a tenant,” he recalls saying.

“It started as a joke. Somebody even laughed.” But it became a “natural discussion after that.”

Because mass transit access was important to FXCollaborative, “We had talked about downtown Manhattan. I said what about Downtown Brooklyn — with everything nearby including nine subway lines within a four-block radius,” Kaplan said.

FXCollaborative is the only office lease so far. The tower will also have a city public school at its base.

Murals now being painted on lower levels will overlook the new Willoughby Square park that’s under construction by the city’s Economic Development Corp.

The tower’s practical appeal includes lots of outdoor space, a “no-contact” lobby much in demand in the pandemic era and column-free office space. Elevators and mechanical functions are contained inside a narrower section of the building that easily fit on the T-shaped site.

One Willoughby Square makes its debut during a stable but pandemic-challenged Brooklyn office market. According to CBRE’s fourth-quarter survey, Brooklyn’s total office inventory is 48 million square feet, of which about one-third are downtown. The average asking rent was stable at $46.99 per square foot, CBRE reported.

FiDi residents keep asking us: Are the Alamo Drafthouse Cinemas, which we first reported on in May 2017, ever going to open?

When city movie theaters reopen after a year in the dark on March 5, the 10-screen Alamo luxury complex at Fosun’s 28 Liberty St. won’t immediately join them. An Alamo spokesman said, “Nothing new to share on Liberty, still intend to open on date TBD.”

The Alamo announcement in 2017 was touted as a boost for newly vibrant FiDi, where tens of thousands of residents have moved in since 9/11, but neighbors are still waiting.
China-based Fosun bought the former One Chase Manhattan Plaza for $750 million in 2013 and spent $160 million more to modernize the 1960 office tower and to make it more public-friendly with stores, Danny Meyer’s “view” restaurant Manhatta on the 60th floor and a planned large food hall.

The opening was next pushed back again to 2020 — supposedly because of issues related to the tower’s landmark status. COVID-19 threw in the final monkey wrench when Gov. Cuomo closed Big Apple cinemas and halted most construction last March. A source said most of the work’s done and Alamo is working through a “punch list” of items before opening.

The latest lease at Rudin Management’s 80 Pine St. is a two-family affair.

Lactalis American Group, the US subsidiary of French-based dairy giant Lactalis Group, is taking 14,752 square feet on the entire 35th floor. The asking rent was $85 per square foot.

The tower, developed by the Rudins in 1960, has a new lobby, new storefronts and other capital improvements designed by Fogarty Finger Architecture. The 1.2 million square-foot tower is now mostly full but will have 800,000 square feet available when AIG moves out later this year.

One World Trade Center has a new tenant: Medical Knowledge Group, which will move from 750 Third Ave.

The eight-year deal is for 12,063 square feet on the 84th floor. MKG addresses business needs of biopharmaceutical companies through analytics-driven research.

The asking rent was $85 per square foot. One World Trade is owned by the Port Authority and the Durst Organization.